Striving to improve touch sensing in robotics, scientists developed a thumb-shaped sensor with a camera hidden inside and trained a deep neural network to infer its haptic contact information. When something touches the finger, the system constructs a three-dimensional force map from the visible deformations of its flexible outer shell. This research invention significantly improves a robot finger’s haptic perception, coming ever closer to the sense of touch of human skin.

Tübingen/Stuttgart – In a paper published on February 23, 2022 in Nature Machine Intelligence, a team of scientists at the Max Planck Institute for Intelligent Systems (MPI-IS) introduce a robust soft haptic sensor named “Insight” that uses computer vision and a deep neural network to accurately estimate where objects come into contact with the sensor and how large the applied forces are. The research project is a significant step toward robots being able to feel their environment as accurately as humans and animals. Like its natural counterpart, the fingertip sensor is very sensitive, robust, and high resolution

The thumb-shaped sensor is made of a soft shell built around a lightweight stiff skeleton. This skeleton holds up the structure much like bones stabilize the soft finger tissue. The shell is made from an elastomer mixed with dark but reflective aluminum flakes, resulting in an opaque greyish color which prevents any external light finding its way in. Hidden inside this finger-sized cap is a tiny 160-degree fish-eye camera which records colorful images illuminated by a ring of LEDs.

When any objects touch the sensor’s shell, the appearance of the color pattern inside the sensor changes. The camera records images many times per second and feeds a deep neural network with this data. The algorithm detects even the smallest change in light in each pixel. Within a fraction of a second, the trained machine-learning model can map out where exactly the finger is contacting an object, determine how strong the forces are and indicate the force direction. The model infers what scientists call a force map: it provides a force vector for every point in the three-dimensional fingertip. 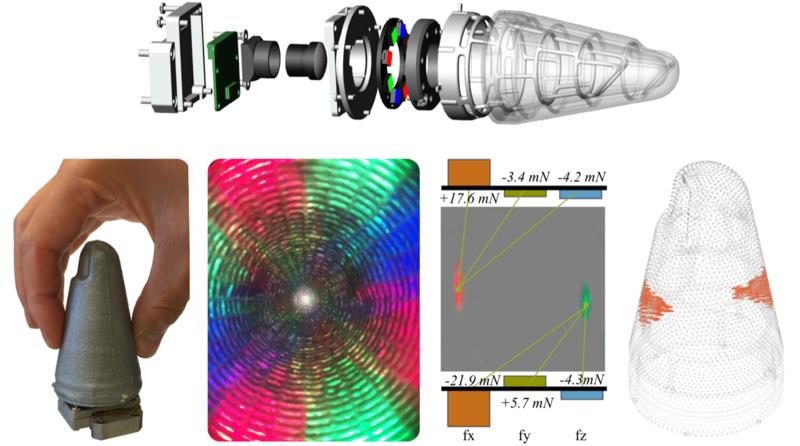 Figure 1 illustrates the sensor, the camera image generated inside the sensor, and the output of the deep neural network, which shows how accurately the position of contact, the force strength and the force direction can be estimated across the contacting areas. A video also shows the sensor’s functionality.

“We achieved this excellent sensing performance through the innovative mechanical design of the shell, the tailored imaging system inside, automatic data collection, and cutting-edge deep learning,” says IMPRS-IS faculty Dr. Georg Martius, Max Planck Research Group Leader at MPI-IS, where he heads the Autonomous Learning Group. His Ph.D. student Huanbo Sun adds: “Our unique hybrid structure of a soft shell enclosing a stiff skeleton ensures high sensitivity and robustness. Our camera can detect even the slightest deformations of the surface from one single image.” Indeed, while testing the sensor, the researchers realized it was sensitive enough to feel its own orientation relative to gravity.

The third member of the team is IMPRS-IS faculty Dr. Katherine J. Kuchenbecker, the Director of the Haptic Intelligence Department at MPI-IS. She confirms that the new sensor will be useful: “Previous soft haptic sensors had only small sensing areas, were delicate and difficult to make, and often could not feel forces parallel to the skin, which are essential for robotic manipulation like holding a glass of water or sliding a coin along a table,” says Kuchenbecker.

But how does such a sensor learn? Huanbo Sun designed a testbed to generate the training data needed for the machine-learning model to understand the correlation between the change in raw image pixels and the forces applied. The testbed probes the sensor all around its surface and records the true contact force vector together with the camera image inside the sensor. In this way, about 200,000 measurements were generated. It took nearly three weeks to collect the data and another one day to train the machine-learning model. Surviving this long experiment with so many different contact forces helped prove the robustness of Insight’s mechanical design, and tests with a larger probe showed how well the sensing system generalizes.

Another special feature of the thumb-shaped sensor is that it possesses a nail-shaped zone with a thinner elastomer layer. This tactile fovea is designed to detect even tiny forces and detailed object shapes. For this super-sensitive zone, the scientists choose an elastomer thickness of 1.2 mm rather than the 4 mm they used on the rest of the finger sensor.

“The hardware and software design we present in our work can be transferred to a wide variety of robot parts with different shapes and precision requirements. The machine-learning architecture, training, and inference process are all general and can be applied to many other sensor designs,” Huanbo Sun concludes.