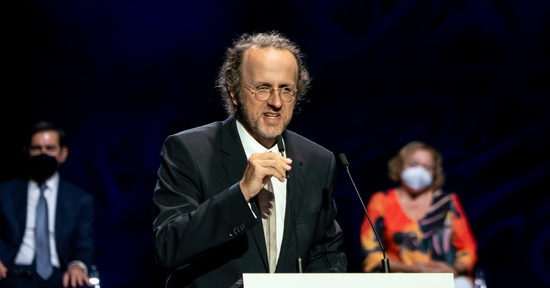 At an award ceremony in Bilbao, the BBVA Foundation recognizes Schölkopf for his work that has advanced the field of artificial intelligence by teaching machines the human skill of classifying data.

Bilbao/Tübingen - The BBVA Foundation Frontiers of Knowledge Award in the Information and Communications Technology category has gone in this twelfth edition to Bernhard Schölkopf as well as to Isabelle Guyon and Vladimir Vapnik for their “fundamental contributions to machine learning,” in the words of the committee. The methods they developed in artificial intelligence are “transforming the everyday world, improving fields as diverse as medical diagnosis, computer vision, natural language processing and the monitoring of climate change.”

The ceremony of the 12th and 13th editions of the BBVA Foundation Frontiers of Knowledge Awards, which was held at the Euskalduna Conference Centre in Bilbao, highlighted the value of science and culture in tackling the great global challenges facing humanity, above and beyond the pandemic; among them, the environmental emergency, a profound technological transformation, and the risk of new economic crises.

Bernhard Schölkopf stressed both the opportunities and risks of the new tech revolution: “Machines that process information touch the human condition in more subtle ways than machines that are merely processing energy. We are beginning to see this in many ways – AI can diagnose diseases, manipulate information, influence elections, even help build weapons that take autonomous decisions without being accountable.” Hence the importance, he insisted, of not losing sight of the ethical dimension in our development of intelligent machines: “Machine learning is technology, and technology is built by people to serve purposes.”

The awardees have developed methods that endow machines with the essential human skill of recognizing patterns in large volumes of data, enabling them to be sorted into categories. The goal is for the machine to learn through being presented with numerous examples.

Vapnik and Guyon came up with the mathematical tools known as support vector machines (SVM), while Schölkopf extended their range and power to help found the field of kernel methods, which allow for the input of much more specific categories, thereby multiplying applications. These models are described by the committee as representing “a major machine learning paradigm in both research and applications.

Thanks to SVM and kernel methods, intelligent machines can now be trained to classify data sets with human precision, or at times even better, enabling them to recognize everything from voices, handwriting or faces to cancer cells or the fraudulent use of credit cards.
SVMs are now being used in genomics, cancer research, neurology, diagnostic imaging, and even in HIV drug cocktail optimization, as well as finding diverse applications in climate research, geophysics, and astrophysics.

Schölkopf, Director at the Max Planck Institute for Intelligent Systems in Tübingen (Germany), has recently been employing these methods to analyze data from the NASA satellite Kepler 2. This has helped with the discovery of 21 extrasolar planets, including one with an atmosphere in which signs of water vapor have been detected for the first time.

In the words of one of the nominators, Martin Stratmann, President of the Max Planck Society, machine learning is a core discipline of modern artificial intelligence, consisting of “the study of how to extract patterns or regularities from empirical data.” And Vapnik, Guyon and Schölkopf, he adds in his letter, are “the three scientists who have jointly shaped the field.” Notably, Schölkopf is the first scientist working in Europe to receive the BBVA Foundation Frontiers of Knowledge Award in the Information and Communications Technology category.

Machines that learn from examples
The three laureates coincided at America’s Bell Laboratories in the early 1990s. Yet their backgrounds had little in common. Vapnik, born in 1936 in the former USSR, had worked until 1990 at the Institute of Control Sciences in Moscow, where he and his then pupil Alexey Chervonenkis – who died in 2014 – laid the mathematical foundations for automated pattern recognition methods. Vapnik is now widely recognized, the committee remarks, as “a living legend in machine learning.”

Isabelle Guyon (Paris, France, 1961) was a postdoctoral researcher when she met Vapnik in 1991. Together they two would create the first proven method enabling optimal classification of data, the support vector machine. In 1994 they were joined in their efforts by one of Vapnik’s doctoral students, Bernhard Schölkopf, who expanded the application range of SVMs.

For Vapnik, speaking on the phone after hearing of the award, “the main problem in artificial intelligence is how to get the machine to recognize things, how to distinguish, for instance, between men and women or between different medical diagnoses. You cannot give the machine the rule, the machine has to learn the rule. The support vector machine was developed precisely to fulfil this condition. The aim of all these methods of machine learning is simply so the machine can learn from examples.”

“Machine learning technology is the foundation of almost everything in AI-related business, and will become more and more important in future,” affirms Vapnik, who confesses that he too has been greatly surprised at how much the field has expanded in the past few decades.
The awardee also recalled the initial problem that gave rise to the machine learning field “over fifty years ago,” when he was asked “to solve a small, practical problem that consisted of distinguishing between oil and water, so as to achieve greater precision during prospections based on geological observations.”

In search of cause-effect
Although their paths have diverged, the three laureates have continued to collaborate. Specifically, Guyon and Schölkopf are working on what is seen as one of the key problems in the area: how to identify not just statistical correlations in a forest of data but also relations of causality. Advances in this terrain could tell us, for example, whether a genetic mutation is the cause or consequence of a cancerous process.

The future of AI
Both Vapnik and Schölkopf are convinced that the AI-led transformation of society is only just starting, and that many of the tasks now performed by humans will be taken over by machines. But this is not to say that machines will actually surpass us in intelligence.
“The machine can already do better than humans at recognizing things, for example, in cases of medical diagnosis or facial recognition,” says Vapnik. “But for me that doesn’t mean that the machine is intelligent. Intelligence is a whole lot more, and we are only just beginning to understand what it is.”

Schölkopf agrees that “we are extremely far away from a machine being more intelligent than a human being.” It is true, he adds, that “in very specific applications, like playing chess or Go, or perhaps in optical recognition scenarios like the diagnosis of skin cancer, machines can do better than humans.” Like Vapnik, however, Schölkopf does not believe that pattern recognition “should really be defined as intelligence,” since what we are talking about is “performance in one very restricted task.”

“What is interesting about our intelligence,” Schölkopf continues, “is that we can play Go then get up from the table and make dinner, which a machine cannot do.” By this general standard of intelligence, the German scientist insists that “machines are still much more stupid than humans.” That said, advances in machine learning are compelling enough, he believes, to cause “legitimate concern that the technology may in future take some kinds of jobs away,” and this is something “we should begin to think about as a society.”

Laureate bio note
Bernhard Schölkopf (Stuttgart, Germany, 1968) studied physics, mathematics, and philosophy at the Universities of London and Tübingen (1988-1994), before going on to earn a Ph.D. in Computer Science at TU Berlin in 1997. After spells as a researcher and group leader at the National Research Center for Computer Science (Berlin), Microsoft Research (Cambridge), and Biowulf Technologies (New York), in 2001 he was appointed a Director at the Max Planck Institute for Biological Cybernetics in Tübingen. He remained there until 2010, and the following year took up the post of Director at the Max Planck Institute for Intelligent Systems, where he heads the Department of Empirical Inference.

Author of more than 460 publications, he is also an Affiliated Professor at ETH Zurich and an Amazon Distinguished Scholar. He is one of three Editors-in-Chief of the Journal of Machine Learning Research and a Series Editor of Information Science and Statistics, as well as serving on the boards of the Neural Information Processing Systems Foundation and of the International Machine Learning Society.

About the BBVA Foundation Frontiers of Knowledge Awards
The BBVA Foundation centers its activity on the promotion of world-class scientific research and cultural creation, and the encouragement of talent. Established in 2008, it recognizes and rewards contributions of singular impact in diverse fields of science, technology, social sciences and the humanities that have demonstrably expanded the frontiers of the known world, opening up new paradigms and knowledge fields. Their eight categories are reflective of the knowledge map of the 21st century, encompassing basic research in Physics, Chemistry and Mathematics, Biology and Biomedicine, Information and Communication Technologies, Humanities and Social Sciences, Economics, Finance and Management, Ecology and Conservation Biology, Climate Change, and, within the arts, the supremely creative realm of music. 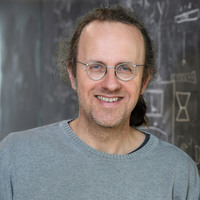